A fully entangled creative team will work together as a Collaborative Innovation Network (COIN). Collaborative Innovation Networks (COINs) are small teams of intrinsically motivated people who collaborate over the Internet to create something radically new. The work atmosphere in a COIN thus corresponds to a team in groupflow. To reach flow, a team member must be intrinsically motivated by the goals of the COIN. The COIN creation process is inspired by the bees, and consists of embedding the COIN core team into a larger ecosystem of Collaborative Learning Networks (CLN) and CIN (Collaborative Interest Network) that carry the innovative ideas and products of the COIN over the tipping point, towards wider societal acceptance. 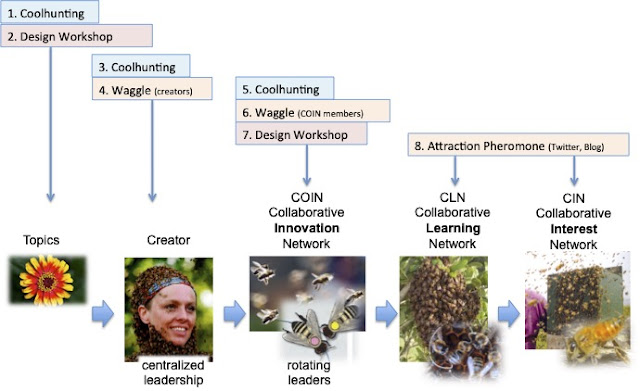 Figure 74 describes the COIN creation process as tried and tested in many COIN creation projects. The key for creating a COIN is that the members are there not because they are paid to be there, but because they care about the cause. The first step when creating a COIN is to decide on the initial task that the team wants to tackle. For example, I was involved in creating a COIN for addressing infant mortality in the US, sponsored by the Maternal and Child Health Bureau of the US Health Resources & Services Administration. To get the COIN off the ground, a passionate group got together to coolhunt for solutions to address the stubborn issue of health disparity in the US.  Different from other wealthy Western countries, in the US, health is strongly correlated with income, with infant mortality in the lowest income bracket being similar to a third world development country.  To develop radical innovations tackling this issue, a COIN creation process was officially kicked off through a workshop. Before the workshop, the organizing group did a “waggle dance” similar to the bees, which dance to attract other bees to their honey source. The human “bees” did a waggle dance to attract other social workers and public health officials to their cause. In the workshop the team brainstormed, collecting and sorting different ideas. It finally decided on developing a framework for creating community action networks, bringing together disadvantaged families with community elders, social workers, and government officials. In the next step the team decided on its informal leaders. This happened by volunteers stepping up to assume leadership roles.

Once the COIN was set up and running, group members formed subteams or individually worked on solutions, while getting together on monthly zoom meetings to share progress, and collaborate on further developing new products. I really liked this brainstorming process. There were about a dozen members in the COIN, each of us at a different location, having a zoom window open, and a shared Google doc. This shared editing in the Google doc was amazingly productive, with each of the COIN members typing their thinking and ideas in the online document in real time, editing and answering each other’s comments.  Management of the project was done in rotating leadership, with members assuming a leading role based on the skills they brought to the table and the task that needed to be done. Once initial products and solutions were developed, the COIN members started spreading the “attraction pheromone”. This is similar to bee scouts which are locating new housing for a swarming bee hive, and then guide the swarm by spreading attraction pheromone in the air and at the new location such that the entire swarm can follow and will find the new dwelling. A human COIN will create a Collaborative Learning Network in this phase, recruiting other potential bees by teaching them the tools and methods that the COIN developed. In the case of the infant mortality COIN, this phase consists of organizing webinars, building a Web site, and writing documents about community action networks for other social workers all across the US. These social workers who learned from the initial COIN, further distributed the materials and invited young mothers, fathers, and other family members to the community action networks. These families with young babies from disadvantaged backgrounds in the community action networks form the Collaborative Interest Network, the final end users of the product that the COIN developed.

COINs have been around for a long time, turbocharged by the emergence of the Internet and the Web. The creation of the Web by Tim Berners-Lee and his colleagues, Wikipedia by Jimmy Wales, or Linux by Linus Torvalds are all poster stories of disruptive innovation by COINs. Every successful startup such as Apple, Google, or Facebook has at its core a COIN.  The challenge for large organizations and companies is to maintain an environment encouraging the emergence of COINs.