In the documentary movie “An Inconvenient Truth” former US Vice President Al Gore talks about the dangers of global warming, showing each of us a virtual mirror of how our actions might be causing environmental change and global warming. Similarly, through virtual mirroring of individual communication patterns, each individual might be forced to face personal inconvenient truths. In the virtual mirror others will tell you through the “Other-Selfie” who you really are – even if you don’t like it. Just like with global warming, we can either keep our unhealthy old ways until the world blows up in our face, or face them heads on and initiate corrective action. Virtual mirroring points out individual weaknesses, ideally, an individual seeks out the pain and accepts their deficiencies, and converts them into strengths. Frequently the fastest way to reach a goal is also the most inconvenient. Admitting inconvenient truths gets people out of their comfort zone, and will force them to change. Oprah Winfrey showed the same willingness to face inconvenient truths when admitting to sexual abuse in her childhood right in her show. This was at the same time very painful, but also very liberating, and building bridges to her audience, as her humility and empathy made her more accessible to her listeners.

As has been seen before, frequently we are very bad judges of ourselves. Our friends do a much better job in assessing our personality. For example, as mentioned earlier, in a longitudinal survey of 600 adults tracking changes in personality over time, the researchers found that our friends are much better judges of our personalities than we are ourselves. The researchers partially explained the higher accuracy of friends’ personality assessment through the capability of aggregating assessments of multiple friends for an individual. This wisdom of our friends can be aggregated through AI to predict for instance individual moral values based on the combined honest signals of large groups of people. 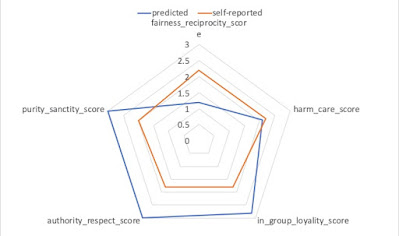 Figure 71 illustrates the difference of an employee in his self-rated moral values, and the moral values predicted through the language he is using in e-mail, as well as his body movements using the happimeter. For instance, we see that he thinks of himself as a fair person, and not particularly concerned about purity and sanctity. The machine learning model tells another story, with a very high degree of purity and sanctity, and a much lower fairness score than the self-assessment would suggest.

Emotions can also be tracked in video meetings through facial emotion recognition. By showing the aggregated emotions of participants in real-time, the productivity of a meeting can be improved.

Figure 72 illustrates an emotion tracking system built by students in the COINs course, that tries to encourage an “emotional rollercoaster”. But using a similar system, and comparing the emotions shown in the faces during the meeting with perceived meeting outcome, we found that an “emotional rollercoaster” was correlated with more productive meetings . In particular just showing happy faces was not enough for a productive meeting, it was much better to show a mix of happy, surprised, and fearful faces. Having only neutral faces, on the other hand, was the predictor of unproductive meetings.

Besides the “emotional rollercoaster”, another predictor of productive meetings is “turn-taking”, the more turns different people take, and the more they alternate in speaking, the more productive the meeting will be. We first noticed that using the sociometric badges .

Figure 73 shows the Web version of the meeting balancer, which shows the turns between participants in a video conference. Showing these turns, and showing individuals when they talk too much or too little, is highly efficient in democratizing speaking time and thus increasing the experience of meeting participants and the overall creative output of the meeting.

According to Mihaly Csikszentmihalyi, working in flow means being in positive stress or eustress.  Working in a team in groupflow does not mean unimpeded, unlimited, unending happiness. Rather, as shown in earlier chapters (see I.2.3), going through iterative phases of external stress and pain will lead to flow and happiness. Overcoming pain and uncertainty might in the end produce huge joy when the definitive product is finally here. Intrinsically motivated people, working in beeflow inspired by their cause, and not by money, power, or glory, are more resilient towards adversity while working on their project than teams of ants or leeches, and thus in a much better position to reach groupflow.