Spoken and written words are a key source for recognizing emotions. Natural Language Processing (NLP) has long been the primary technology for automatically recognizing emotions in text. Before the rapid growth and availability of machine learning and artificial intelligence based approaches, simpler bag-of-words systems were used to locate emotions in text. Such a bag-of-words for happiness would include words like “happy”, “joy”, “great”, “good”, etc. while a bag-of-words for sadness would include words like “sad”, ”bad”, ”horrible”, etc. The more words of the happy-bag-of-words a text will include, the happier the NLP system would rate it. The problem is that such a system would miss-classify “not bad at all” as an answer to “how are you?” as negative. Many extensions of these initial simple systems have been proposed. Today NLP is mostly done with variants of Recurrent Neural Networks (RNN) that are suited for sentences of text, such as Long Short-Term Memory (LSTM).

The Griffin system also includes the capability to compute emotions using the tribefinder function described in section II.6. The content visualization view of Griffin shown in Figure 43 illustrates the emotions injustice, unfairness, fairness, and appreciation in the individual messages that two individuals exchange, alternatively all the messages an individual sends can be displayed. It also shows what words make the individual a particular member of the emotion tribe. In the example below, the word “tahnks” indicates Steven Kean’s fairness, while the word “mail” indicates injustice. 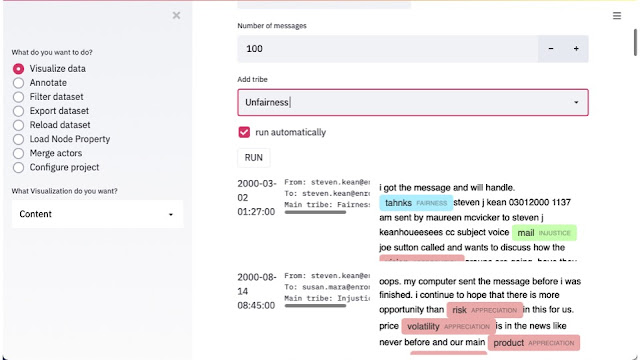 We have done many projects where we use the sentiment of e-mail users to predict their business results. For instance, if an employee becomes emotionally “flat”, s/he is highly likely to leave the company in the next three months. We have also found that frequently more emotional people are more creative, although we have encountered significant exceptions to this rule.