"If wild beasts can be broken to the yoke, it must not be despaired of correcting the man who has strayed." -- Michel Foucault, Madness and Civilization, p 78.

Going back to the Stone Age, humans have always split into different tribes, warring at times, collaborating peacefully at others. However, within a tribe or a nation, in-group loyalty and homogeneity was required. Only recently has it been accepted that also citizens of Western democracies are split into many virtual tribes. 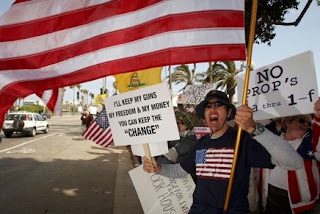 In his classic work about the history of madness, Michel Focault describes how deviants from the majority have been (mis-)treated over the last centuries. In the age of enlightenment, in the 18th and 19th century in Europe, houses of confinement, prisons, were used to lock away criminals, the mad, and the jobless. The above quote is taken from the gate to a prison in Hamburg. The prison’s goal was to enforce social order, through an authoritarian model, which was seen as “adequate to virtue.” Through these houses of confinement, the goal was to break outliers to the yoke, pursuing a “one size fits all” approach. The age of enlightenment led to European National States, the successor of the feudal medieval states. Instead of allegiance to a monarch or ruler, national states are based on allegiance to a nation, identified through racial characteristics and shared cultural values. Through allegiance to a figure of authority, be it the French King or Emperor, the Austrian or German Emperor, or the British King, one was made a proud French, Austrian, German, or Brit, being a member of the French, Austrian, German or British nation, speaking the same language, and having a similar shared “look and feel”. People that behaved differently, that did not share the same “look and feel” were locked away in these houses of confinement, be it the gypsies in the Austrian empire, or poets and scientists like Oscar Wilde and Alan Turing who were locked away for not hiding their homosexuality. People committing less severe transgressions, such as being poor, were put into confinement to convert them from their obscenely deviating ways to re-educate them to become adjusted members of the nation. If that failed, they were locked away permanently, to avoid diluting the purity of the tribe. Alternatively, they might have been shipped to America or Australia.

Global migration and the Internet have been a huge equalizer over the last hundred years. However ultra-nationalists, or “fatherlanders”, are still going strong, for instance #makingAmericaGreatAgain, or as members of the QAnon group, spreading wild conspiracy theories against the enemies of Donald Trump’s tribe. Fatherlanders, the members of the ultra-nationalist tribe, are frequently fundamentally religious, they abhor change, and admire authority and tradition. As has been shown in research projects, people with these personality characteristics tend to be prevalent in professions such as the police or the army . While one of their key characteristics is loyalty towards members of their own tribe, they have little tolerance for members of other tribes, as has also been shown in research. Also, they are not very open to innovation, rather they don’t like change, value tradition, and want to conserve things the way they always have been.

According to anthropologists, a tribe is defined as a social group unified by a common culture. A tribe is thus unified by a shared value system, customs, manners, and practices. Based on an in-depth analysis of Wikipedia categories, we have created five different dimensions of tribal affiliations. The central dimension is “alternative realities” consisting of the four tribes “fatherlanders”, “nerds”, “treehuggers”, and “spiritualist”. (Figure 9) 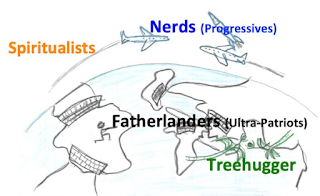 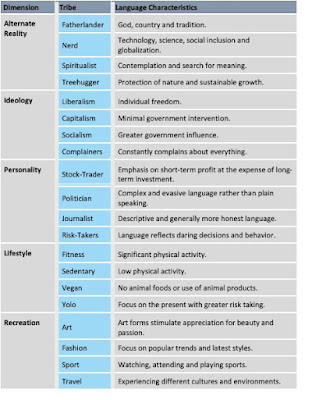 How did we come up with those twenty tribes? Initially we set out with hundreds of categorizations of beliefs and cultures listed in Wikipedia, and then started mining hundreds of millions of tweets, to identify through AI and deep learning cohesive sub-groups who were using a similar vocabulary and had clearly recognizable tribal leaders. This led to the elimination of most tribe candidates, and left us with the twenty tribes grouped into the four categories listed in Table 1.