At the final presentation of my one-semester COINs seminar there were seven teams, each with three to five graduate students. The team members were from three universities in Germany and Switzerland and had worked extremely hard to produce amazing results. They had created hardware and software to measure face-to-face and online human interaction. One team had developed sensors and software to track human-plant interaction. A second team had built a system to measure personality profiles from facial emotional responses when watching a video. Another team had created a system for AI-supported matchmaking based on automatic personality extraction from text. Other teams predicted the success of Youtube videos from facial expressions on video thumbnails or studied Covid19 anti-vaxxers from Twitter behavior.  The teams had invested a huge amount of time and effort, at times struggling with overload and not knowing what to do. But in the end, they derived immense satisfaction from their teamwork – in other words, they had been in groupflow – all while working on projects on how to measure and improve groupflow. How did I know they were in groupflow? Looking at the emotions in their faces, in their voices, and in their e-mail interactions told me as much. Measuring their flow using the methods described in this book from the emotions in their faces, in their voices, and in their e-mail interactions confirmed it. Getting into groupflow was supported by virtual mirroring sessions half-way through the course where they got a mirror of their communication behavior, together with suggestions how to improve communication to improve their flow experience. 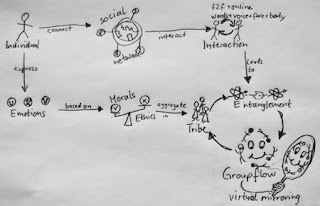 figure 2. Process of getting into groupflow

The process how individuals in an organization reach groupflow is laid out in Figure 2. Groupflow is achieved through a confluence of psychological and sociological processes. External stimuli get us to respond with a particular emotion. The way how we respond to an external stimulus is similarly influenced through the social network we are embedded in. This interaction can happen over long distances, using online social networks, e-mail, and other means of long-distance communication. Alternatively, it can also happen face-to-face. Through hidden subconscious “honest signals”, body language, word usage, and facial cues, individuals signal to each other their emotional state. This means that it is not just the network structure and network dynamics, but also the emotional tone that decides how a social network interaction will play out. In particular, individuals who consciously and correctly perceive their own emotional state as well as the one of their interaction partners, will be more effective collaborators, as frequently people are not aware of their own and others’ emotions.

The more I am with “others like me”, the happier and the more easily in flow I will be.  In other words, the more similar to us the company is we keep, the more we feel at home. People will aggregate in “tribes”, which can be “face-to-face” communities, but also virtual tribes, groups of people virtually connected over the Internet based on shared values. People in the same tribe have similar morals and ethics, and respond to the same external stimulus with the same emotion. Aggregating in tribes, they become entangled. Entangled people thus share similar values and interests. The more entangled they are, the higher the likelihood that they will reach the state of groupflow. Collaboration between fully entangled people does not need many words, as entangled people intuitively know what their collaborators are thinking and doing. When collaborating in groupflow, the team will reach a state of collective consciousness where communication and collaboration are innate, without the need for external coordination. When a team reaches the state of groupflow, its members will be in a condition of happiness and elation, immensely enjoying their collaboration while producing superior results.

Figure 3 describes the pillars which are essential for individuals and teams to reach groupflow. 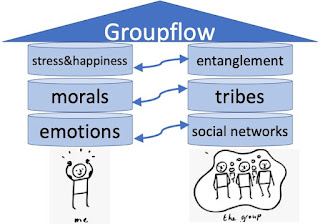 Figure 3. Pillars of groupflow
Groupflow starts and ends with emotions, triggered by individuals interacting with each other in social networks. Emotions are shown through the tone of the voice and facial expressions. For instance, the musician Prince used to say that he would show an “ugly face” when getting “in the zone”, which is how he called the flow state when jamming with his bandmates. At the same time, emotions are also expressed by body movements – for instance we can either walk limp and depressed, or happy and full of energy. When listening to the music at a jazz concert, the listener’s body will start swinging in synch with the other people at the concert, reflecting shared happiness and upbeat mood.  These emotions influence and are influenced by the people that the individual is interacting with – their social network. Emotions are contagious, in positive and negative ways. If listeners come home from the concert in a happy elated mood, they will infect their family members who stayed home with their joy. Or think how a little child showing his excitement under the Christmas tree infects the sober adults with her innocent joy.  The opposite is of course also true, with a depressed person spreading sadness among the people they are interacting with. In particular, the structure of the interaction – if somebody is connected to many people or isolated; the dynamics of the interaction – how quickly are others responding; and the contents of the interaction – is somebody using emotionally flat or emotionally charged words in their writing, are indicators of the flow of a team.  For instance, the more the audience at a jazz concert is energized by the music of the performers, the more the listeners swing their bodies in synch with the musicians, the more the room is packed instead of half empty, and the more the music is filling the room instead of being barely audible, the more are musicians and listeners in groupflow. The same is true for a project team working frantically under tight deadlines: The more honest they communicate with each other face-to-face and in their e-mails “speaking up”, sharing their emotions, responding and deciding quickly, and communicating directly, not along managerial hierarchies but between the ones who need to know, the more they will be entangled.
Moral values and membership in virtual tribes decide if we like somebody or not. People like to be with people like themselves. Soccer fan likes soccer fan, jazz fan likes jazz fan, somebody with deep Christian values wants to spend time with other people sharing their Christian faith – in other words, we like people that are members of the same virtual tribe, and share the same moral values. For instance, Trump supporters all share the same values, they admire authority and tradition and want to MakeAmericaGreatAgain! If we share the same emotions with other members of our organization, because we respond similarly shocked or enraptured to an event, because we all buy into the same goal – for instance building a hospital in ten days, releasing the next version of an opensource software application, or performing an opera together, we will be highly stressed, but also very happy, and thus fully entangled with the other people collaborating with us in reaching our goal. Measuring the shared emotions of the team members will tell how entangled the team is. The more entangled the team is, the more it will be in groupflow.
Labels: entanglement groupflow