III.2.3 Increasing Happiness by Virtual Mirroring with the Happimeter

“Happiness depends on ourselves” – Aristotle

As discussed in section I.3.3, happiness has been an overarching goal of mankind at least since Aristotle spoke of Eudaimonia. According to Aristotle, happiness starts with ourselves. Only if we know ourselves, can we be happy. Thus, it is essential to know what makes us happy and unhappy. However, measuring happiness has been elusive and until now has almost exclusively been done by asking survey questions about self-perceived happiness. We have created a novel happiness measurement device, tracking happiness and stress through changes in body signals with a smartwatch, the “Happimeter”. It predicts individual emotions from sensor data collected by the smartwatch, such as acceleration, heartbeat, and activity. Figure 68 illustrates the key components of the Happimeter. It consists of a smartwatch, currently either an Apple watch or an Android Wear watch, that measures body signals of the wearer, such as heart rate, movement through an accelerometer, and speech energy through the microphone (no content is recorded). The data is then transferred to the smartphone, where it is shown in the Happimeter app. The Happimeter app also includes the meeting balancer which supports turn-taking in meetings to encourage more balanced speaking time among meeting participants. The data is sent from the smartphone to a machine learning server in the cloud, which computes the happiness of the wearer of the watch based on the body signals with an accuracy of 75 to 80 percent. Additionally, users can register on a Web site, to form teams to track their team happiness as well as their individual happiness and other emotions over extended periods of time. 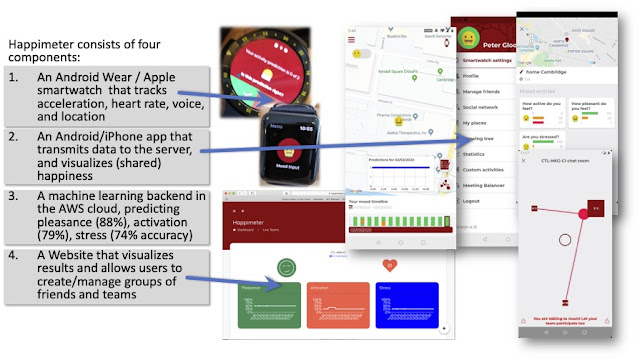 The Happimeter was tested in many different settings. For instance, it was given to 22 employees in the innovation lab of a bank for a period of three months to measure their individual happiness, activity, and stress. The participants were randomly divided into an experimental and a control group of similar size. In an initial training phase lasting a few weeks, both groups wore the watch and entered their subjective happiness, activity and stress levels several times a day. These user-entered ratings were then used to train a machine learning system using the sensors of the smartwatch to subsequently automatically predict happiness, activity, and stress. In a second phase, only the experimental group was told their happiness, together with recommendations of what they could do to increase their happiness if the happimeter noticed that happiness was low. The experimental group received ongoing feedback about their mood and which activity, sensor signals, or interaction with other people, made them happier or unhappier. The control group did not get any feedback about their predicted and manually entered emotions. 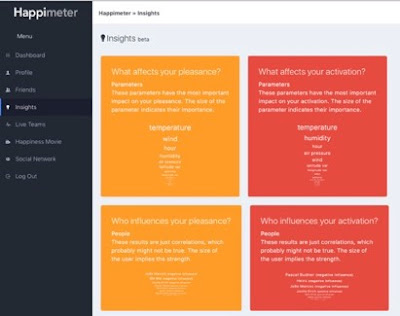 Figure 69 illustrates the individual insights that users of the Happimeter get from the Web site. They learn what precisely, for instance the weather, changes in location, or the time of the day make them unhappy. They are also told if other people they are interacting with (these also need to wear the Happimeter) will increase or decrease their happiness. Note that the Happimeter can only show correlation, but not causation. It could well be that Joao Marcos is an indicator of my unhappiness not because I don’t like him, but because I regularly travel with him in the subway, which is always late and thus makes me unhappy.

Figure 70 shows the default recommendations that Happimeter gives to users to increase their happiness, when the Happimeter predicts that the wearer of the Happimeter is unhappy, stressed, and unactive. These suggestions given in response to a combination of pleasance, activation, and stress can be changed by the user. 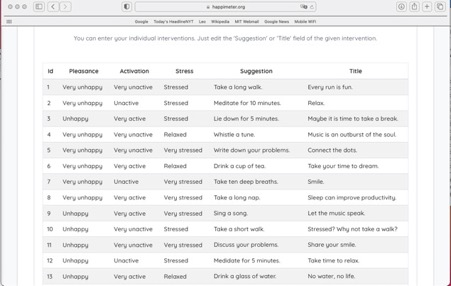 Figure 70. Recommendations by Happimeter to increase happiness of wearer

Just like in quantum physics we observed a “Heisenberg Effect” – simply measuring a system changes the behavior of the system. When the participants were made aware of their measurements, they changed their behavior: Members of the experimental group that received happiness feedback were 16% happier, and 26% more active than the control group at the end of the experiment. No effect was observed for stress in this experiment.