To further illustrate how social network analysis can be used with e-mail archives, this section briefly describes a sample organizational network analysis using the Griffin SNA tool. Griffin is a Web-based user-friendly social network analysis tool that allows users to do all sorts of communication-archive based social network, emotions, tribe, and contents-based analysis both for static and dynamic exploration. A free version of Griffin can be accessed on griffin.galaxyadvisors.com. As the e-mail archive for this analysis the well-known public-domain Enron E-Mail archive is used. Enron was a Texan energy company that went bankrupt in 2002 because of systemic accounting fraud. In the course of the investigations, the e-mails of 158 former employees of Enron were collected for analysis by law enforcement officials. These e-mails were later cleaned and are now in the public domain, they are frequently used for all sorts of e-mail analysis experiments.

A cleaned subset of the Enron e-mail archive in Griffin format can be downloaded from the following link http://www.ickn.org/sociometrics/enron_griffin_dataset.zip. Note that once that dataset has been downloaded, it needs to be zipped again so it can be directly loaded into Griffin, as the dataset importer in Griffin expects a zip file.

After having started Griffin from griffin.galaxyadvisors.com, click on the tab “Datasets” at the top to go to “Datasets”. Then click on “Import” to import “data.zip”, and select your zipped data file and give the newly created dataset a name. Here it is called “enron”(Figure 27). 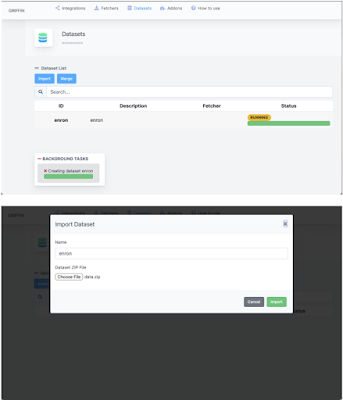 Afterwards click on “processing” to go the Phoenix visualizer. You can annotate the nodes and edges, however note that in this example the initial annotations have already been computed (Figure 28). If you delete nodes, you will have to recalculate the annotations. 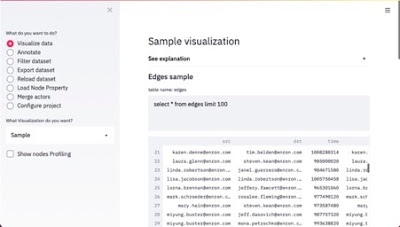 Afterwards you can visualize activity over time, showing that the most active time was from March to August 2001 (Figure 29). 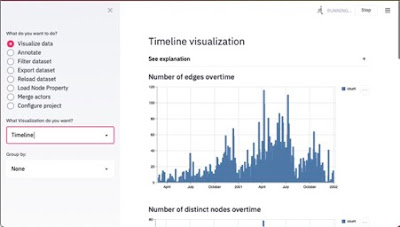 The picture below shows the most central actors, sized by betweenness. It also shows who uses language representing predominantly “fairness”, colored in red, “injustice”, colored in green, “unfairness” in violet, and “appreciation” in orange. 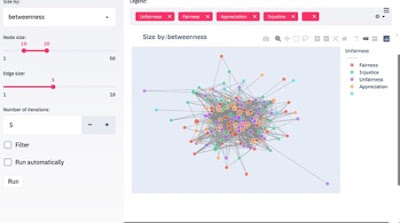 Figure 30. Most influential actors in Enron dataset by betweenness, colored by “unfairness” emotions

The scatter plot below (Figure 31) shows each individual as a dot, any “honest signal” annotation can be chosen for display in the x and y-axis. In the example below the x-axis is “messages total”, while the y-axis is contribution index.  The dots are colored by “aggression” word usage. We see that Pete Davis is the most active e-mailer with 600 e-mails exchanged, his contribution index is 0, meaning it is well balanced, he thus sends and receives about 300 e-mails, his writing style is mostly “serene”. 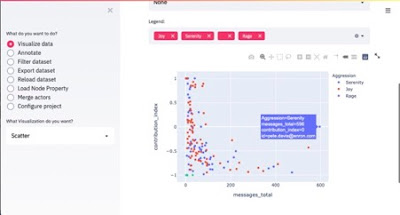 The view below (Figure 32) shows the communication view, it illustrates (not shown here) how much two particular subgroups communicate with each other, it also shows the word cloud with the most used words in the entire Enron e-mail archive. 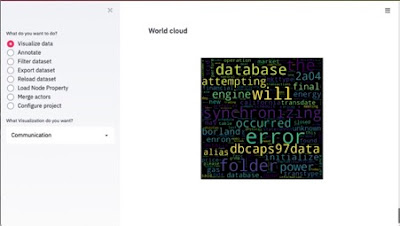 The radar chart below shows a comparison of “honest signal” annotations between different tribes (see I.5) based on their word usage. We can see that “risk-takers” are most influential and on average send the most messages, however the messages they get from others are not influential at all. “Politicians” on the other hand get influential messages from others, but do not have much respect, as others on average take the most time (slowest alter ART (Average Response Time)) to send them e-mails back. The “stock-traders” have the most respect, as others respond them the fastest (they have the lowest alter ART). 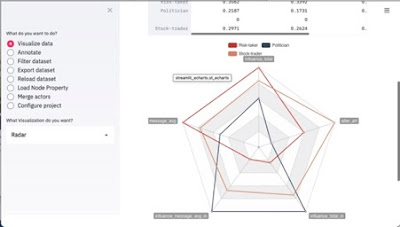 Further examples of Griffin’s emotion calculation functions illustrated by the Enron e-mail archive will be shown in the subsequent sections on measuring dynamics and emotions.