“Qi” in Chinese Taoist philosophy means energy, but can also be understood as the force inherent in all living beings. We all want to be energetic, forceful, full of “Qi”. The simplest description of energy as a term in physics is the ability to do work. Applied to humans, the more energy a person has, the more work they can do.  An individual can radiate positive energy, being an energy source with whom everybody wants to spend time. A person who is a positive energy source will get others to collaborate with them. Spreading positive energy happens through words, language, and body gestures. This goes back to the Greek philosophers, where in classical Greek rhetorical tradition, the ability of language to create a “stir to the mind” is called “energia”. “Energia” is quantified by the capability of verbal, visual, and aural traces to organize and produce collective physical and mental experiences. Energia is associated with the potential to create emotions such as joy, fear, anger, disgust, laughter, tension, pain, and relief. A person who is a positive energy source will communicate with others by being heard, seen, and read, and thus produce energy by stoking emotions. A group of people will become a collective energy source by sharing positive energy.

For instance, a wedding among ultra-Orthodox Jews on November 8, 2020 drew 7,000 guests during the Covid-19 lockdown in New York City. The organizers succeeded in keeping the event secret from the authorities to circumvent the strict Covid-19 lockdown regulations. The organizers described the wedding as “an experience for which words do not suffice” and “a celebration the likes of which we have rarely had the good fortune to experience” , well worth the $15,000 fine for violating the city’s lockdown and isolation rules. Obviously, participants were drawing a huge amount of energy from celebrating with thousands of likeminded people.  Only if the members of a team share their force, their “Qi”, through shared goals, motivation, and passion, will they be entangled. A group of people randomly thrown together without shared goals and motivation will not develop shared energy, and thus not be entangled. If people communicate through language, body signals, and visual cues to build collective energy and collective consciousness they will become entangled. This is what happened at the ultra-Orthodox wedding in New York City, where 7000 people were singing and dancing together in close physical contact at the height of the Covid-19 lockdown.

How does positive entanglement happen? Imagine Bill at the office, who is always smiling, greeting everybody in the morning, asking Mary about her children, and questioning Sophia about the health of her old mother. During lunch time Bill will invite Jeremy to eat lunch together in the office kitchen, discussing the latest sports and political news, while he makes sure that Jeremy gets enough speaking time to express his opinions. In meetings Bill will let others speak first, if he disagrees with something that’s said in the meeting, he will deliver his arguments on a factual basis, and make sure not to offend others on a personal level. Compare this to John who comes grumpily in the office in the morning, keeps to himself, and if he talks at all he will complain about the weather, the sad state of politics, and his poor health. Bill radiates positive energy, his little acts of friendly communication will produce small bursts of energy among Bill’s conversation partners, while John spreads negative energy. 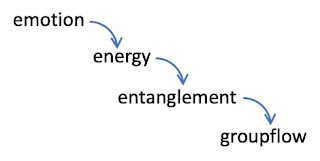 Energy for all Living Beings comes through emotions. A lion chasing after a gazelle will trigger huge bursts of fear in the gazelle, leading to the release of large amounts of fear hormones such as adrenaline and cortisone, thus enabling the gazelle to mobilize all her energy to escape the lion as fast as she can. The same is true for humans. Bill spreading positive energy will create positive emotions of surprise, joy, and self-esteem among his conversation and meeting partners, while John’s negative energy will lead to frustration, disgust, and anger among the people with whom he interacts. Bill’s conversation partners will be more entangled, while John’s negative energy leading to negative emotions will destroy entanglement.

In the management science literature  energy has been defined as “a type of positive affective arousal, which people can experience as emotion”. For instance, interaction rituals as defined by Randall Collins, symbols of belonging to a group such as national flags and anthems, or the jersey of a soccer club create emotional energy (see section  I.5.2) among the members of the group. Their emotions will give them energy and drive them to action. The physical properties of energy indicate how to activate collective human energy for creative and productive use.

According to the First Law of Thermodynamics the total amount of energy and matter is constant in the Universe. It can not be destroyed or created, only be converted from one form into another. Energy comes in many forms, and can be transferred from one object to another for instance as heat, light, or motion. What does this mean for human energy? As energy is the capacity to do work, and is transferred from one object to another when a reaction takes place, humans will transfer energy from one person to another by connecting to them through words, gestures, and even direct touch. The collective energy of a group does not appear out of nowhere, but is the sum of the energies of the individual group members. If we want to energize a group, we have to contribute our own energy in the form of passion, enthusiasm, and dedication, infecting the other group members with our own enthusiasm. This also means that sometimes we have to invest energy to overcome pain in order to achieve our goals. This can be as simple as going to the gym in the morning, which is painful and requires considerable energy for overcoming the initial inertia, but after the successful workout will lead to starting the day fully charged and energized.

Emotions do not only create energy, but they can also destroy energy. For instance, if in a meeting I am constantly cutting others short, dominating the discussion and forcing my opinion on others, it will drain their energy, as will showing contempt and disrespect. John’s negative attitude and focus on his own problems will drain energy from others and destroy entanglement among the team mates of John. Whatever triggers collective emotions, triggers the release of collective energy, be it positive or negative, for instance art, a concert, or a soccer match.  While energy will be released collectively, the emotions triggering the energy release can differ depending on the values of the individual. For instance, when watching a soccer match, the fans of the winning team will show overarching joy, while the fans of the losing team will show anger and frustration. Or, looking at politics, the outcome of the 2020 US presidential elections sparked collective anger among the Trump fans, activated collective joy among the Biden fans, and generated collective relief in most countries in Europe.