I.4.2 How to Create Entanglement Between Individuals

In our research we have studied communication ranging from small teams to entire nations, from direct one-to-one exchanges between two individuals to formal interaction by phone, e-mail, and online media in large companies and global organizations. The way how two people communicate shows how much in synch and thus how “entangled” and in groupflow they are. The goal of our research is to create methods and tools for tracking and supporting “entanglement” between individuals, in particular within the same organization, wherever they might be on earth, with the aim of creating an environment where groupflow will emerge spontaneously. “Entangled organizations” communicate in shared awareness. If something happens to the organization in one part of the world, it is immediately felt and responded to in other parts of the world. People can be entangled in both positive and negative ways. While in this book we will focus on positive entanglement, people can also be negatively entangled. For instance, a wife might be entangled in an abusive relationship with a man who constantly beats her, but she is unable to disengage from him. The victim of a hijacking might be entangled with the hijacker, as famously happened when Patty Hearst, the granddaughter of publicist William Randolph Hearst, was taken hostage by terrorists in 1974, and started identifying with her kidnappers, even joining them on bank robberies.

Positively entangled individuals engage in compassionate and nurturing interaction. Personal relationships, partners in married and otherwise committed couples, are prime examples of entangled teams. But any members of a successful team, in business or recreational activities, are entangled.  Nobel prize winner Daniel Kahnemann has the following to say about his collaboration with his longtime partner Amos Tversky:

“Amos and I discovered that we enjoyed working together. Amos was always very funny, and in his presence I became funny as well, so we spent hours of solid work in continuous amusement. The pleasure we found in working together made us exceptionally patient; it is much easier to strive for perfection when you are never bored. Perhaps most important, we checked our critical weapons at the door. Both Amos and I were critical and argumentative, he even more than I, but during the years of our collaboration neither of us ever rejected out of hand anything the other said. Indeed, one of the great joys I found in the collaboration was that Amos frequently saw the point of my vague ideas much more clearly than I did. Amos was the more logical thinker, with an orientation to theory and an unfailing sense of direction. I was more intuitive and rooted in the psychology of perception, from which we borrowed many ideas. We were sufficiently similar to understand each other easily, and sufficiently different to surprise each other. We developed a routine in which we spent much of our working days together, often on long walks. For the next fourteen years our collaboration was the focus of our lives, and the work we did together during those years was the best either of us ever did……………

Until geographical separation made it too difficult to go on, Amos and I enjoyed the extraordinary good fortune of a shared mind that was superior to our individual minds and of a relationship that made our work fun as well as productive. Our collaboration on judgement and decision making was the reason for the Nobel Prize that I received in 2002, which Amos would have shared had he not died, aged fifty-nine, in 1996.”

As Daniel Kahnemann explains, a culture supportive of entanglement will increase the effectiveness, productivity, and happiness of the entangled people, teams, and organizations.  How can an organization, how can the individuals working at the organization create entangled teams? The secret of creating entangled teams is to find matching team members and connect them in a positive way, just like Daniel Kahnemann “found” Amos Tversky, and the two of them subsequently successfully entangled.  So, the next question is: “who are the right team members”? The answer is “people like me”, that is, people who share the same values, respond similarly to unexpected events, and have similar societal beliefs.  This was certainly the case for Daniel Kahnemann, who invited Tversky as a guest speaker to a seminar at Hebrew University in Jerusalem that Kahnemann was teaching.  When they had dinner together after the seminar, they discovered their shared interests and beliefs, and started their long-term collaboration.

In order to find “others like myself”, this also means that the first step is to know about myself, what my personality characteristics are, what my ethical values and societal beliefs are, and so on. Based on knowing myself, I can then set out to find others like myself. We might think that we know who we are, however, a lot of research has shown the opposite. We might either vastly underestimate or overestimate our fairness, we might assume our belief for god and fatherland as a given, only to be shaken if others see us in an entirely different light. Creating entanglement between two people means building awareness for the feelings of others, to understand how they see others, and how others see them. Only when there is extensive overlap between self-image and the image that others have of the individual are we ready to connect and entangle with similar people, who share the same values and beliefs. Spending time in an entangled group is a reliable way to happiness. 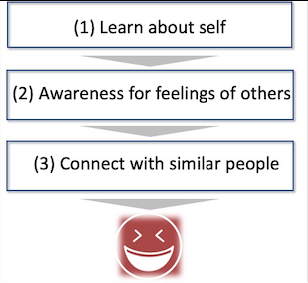 This means that creating a happily entangled swarm will require three steps (Figure 7):