II.3.1 Creating a Virtual Mirror of My Own Mailbox

Doing a social network analysis of my own mailbox is an excellent way to learn about myself. Figure 26 illustrates an e-mail network constructed from my mailbox, obviously I am the most influential person for myself, which is not surprising. The network nodes are sized by influence, see section II.5 for how influence is calculated. I also colored the nodes representing the people based on the words they use, applying the tribe definitions described in Figure 10. As shown by the coloring of the nodes, I am a member of the Nerd tribe, and most of my contacts are either nerds, treehuggers, or spiritualists. There are very few fatherlanders in the network. 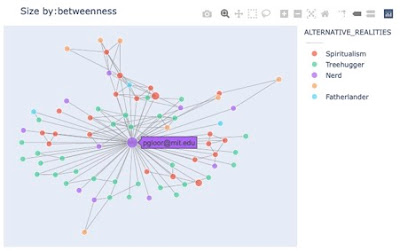 To better understand the network relationships among my friends and collaborators in my own network, the best way is to take myself out of the picture, and remove the node representing myself from the network. This is what was done in Figure 26. 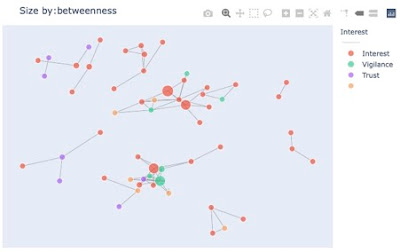 Figure 26. Sample E-Mail Network of my mailbox (with myself removed). Nodes colored by emotions

In Figure 26 the nodes representing people are sized by betweenness centrality, and colored by emotion computed from the text in the e-mails sent by the corresponding person. Seven subgroups are now clearly recognizable, with two being distinctively larger than the other five. These two larger groups represent my two lives working in business and as an academic, teaching the COINs course at Universities of Cologne and Bamberg. The COINs community is shown as the upper cluster, with the two large red nodes representing the two local instructors in Cologne and Bamberg, the business cluster is below, with the large red and green nodes representing my closest collaborators.