I.5.2 Emotional Reactions Indicate Your Tribe

Sometimes we are members of a tribe without being aware of belonging to the same brotherhood. The question is what gets people to self-identify as a member of a tribe, and self-organize and aggregate in a community?

Sociologist Randall Collins introduced the concept of “Interaction Ritual Chains”, with interaction rituals acting as key symbols of group membership for keeping people together. Interaction Rituals appear if three requirements are met: first, human bodies have to be together close enough to read each other’s’ body language through voice, gestures, and facial expressions; second, the humans involved need to focus on the same thing, for instance smoking together or watching the same soccer game and third, they must feel the same shared emotion, for instance the small pleasure of smoking together, or screaming after a goal is scored. If these three conditions occur together, the subsequent Interaction Ritual will reinforce the emotions and the mutual focus of the participants, creating the feeling of what Emile Durkheim calls “collective effervescence”. “Collective effervescence” or “collective enthusiasm” happens when a community gets together, engaging in the same thought and action, thus acting in “collective awareness” or “collective consciousness”. A successful Interaction Ritual has three consequences: first, triggering a feeling of belonging and solidarity with the group. Second, it generates membership symbols such as flags, but also rituals such a gestures, words, or particular persons. Third, it creates emotional energy that gives group members confidence and enthusiasm. This emotional energy can be triggered both by shared delight, for instance if the home soccer team scores a goal, or shared anger, if the opposing team scores.

This means that members of a tribe share the same emotion in response to an external event. Figure 11 illustrates what happens if an indigenous inhabitant of Papua New Guinea finds some maggots. He will show joy and be delighted about this nutritious snack. On the contrary, if a New York office worker finds a maggot in her food, she will be disgusted and repulsed. 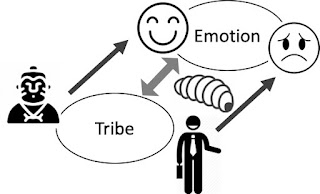 Figure 11. Example of an emotional response to an external stimulus dependent on a different tribe.

The same emotional response, as measured through the level of stress hormone in human saliva, will happen if a heterosexual male with strong beliefs about traditional partnership sees a picture of two men kissing . For a gay man, the same picture will most likely trigger the release of Oxytocin, also known as “love hormone”. This means that what emotion a tribe member experiences in response to an external stimulus is dependent on the ethical rules and morals of the tribe.

The fatherlander tribe (shown by the tank in Figure 12)  will value law and order highly, and unquestioning obeisance of religious authority. In a conservative Islamic society, adultery of a woman might thus lead to anger and disgust, resulting in the stoning of the woman. In a Northern European “treehugger and nerd” society, adultery of a woman might lead to an amicable divorce, and to new love for both former members of the couple.

Figure 13 illustrates how the construction of the wall of President Trump on the southern border of the US to keep immigrants and asylum seekers out of the US triggered very different emotional responses among US citizens based on their different moral value systems. Fatherlanders experienced joy and delight, while most treehuggers experienced anger and sadness.

In other words, the shared emotional response to an external event will be a key part of Randall Collin’s Interaction Ritual, incentivizing people experiencing the same emotions to external stimuli to aggregate in tribes.  However, in digital virtual tribes the third element of Interaction Ritual Chains, the co-located presence of human bodies, is missing. This is where social media comes in. On Twitter and Reddit, in Facebook, Telegram, and Signal, people will show their immediate emotional reactions to each other, leading to echo chambers where the same real or fake news are retweeted, reposted, and liked at a frenetic pace among the members of the same tribe. If possible, tribe members still try to also be physically close to each other and aggregate at the same location, as this releases neurochemicals such as the bonding and love hormone oxytocin and the feel-good hormone serotonin.  This has been vividly demonstrated on January 6, 2021, when a tribe of fervent Trump henchmen got together in Washington DC and stormed the US capitol.