How quickly inventors of new words get others to use their newly created words is an excellent measure for the persuasive power of the inventor. When I am giving talks about “COINs”, the “Happimeter”, “entanglement”, and “virtual mirroring”, the best metric of how well the audience liked my talk is if they start using these new words not only during the questions after my talk, but also during the coffee break afterwards. More generally, the speed with which new concepts are picked up is an excellent metric for the influence that the inventor of the new concept has within a community. Using Natural Language Processing (NLP) this influence can easily be measured. We developed an algorithm that tracks the originality of new words using the well-established  tf/idf (term frequency/inverse document frequency) metric. It counts how popular a word is within a message compared to all the messages circulating in the community. The more frequent a novel word is in a single message, and infrequent in all others, the more distinctive and original the word is. The more somebody introduces distinctive words, the more creative that person is. The faster these novel distinctive words are picked up by others, the more influential the introducer of these new words is. We have implemented this influence algorithm in the Griffin SNA tools

Figure 44 illustrates the influence network of the Enron dataset. The nodes in the network are sized by influence, and colored by ideology tribe membership. The picture below shows for example that Tana Jones is a highly influential member of the “capitalist” tribe. 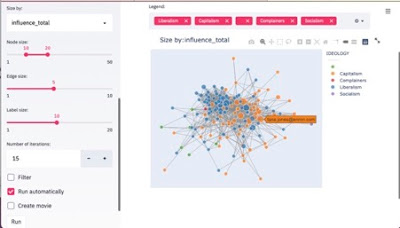 A second way to show how influence in a community is distributed is the 3D histogram view. There the x-axis lists all people in the network, the y-axis lists time, and the z-axis is influence (or any other honest signal available in Griffin). Figure 45 illustrates the histogram view showing in one chart when a particular person was most influential for the Enron dataset. We see that Jeff Dasovich was most influential in February 2001. Note that any other “honest signal” can be chosen for display in the z-axis. 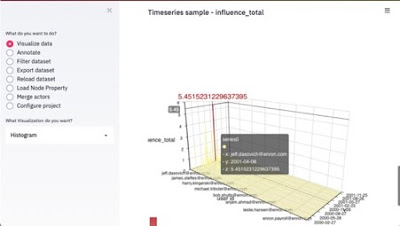