Synchronization is a basic property of life. It appears everywhere, from oscillating fireflies to the natural behavior of humans. It takes place so invisibly that we usually do not notice it. For humans it is triggered by audio-visual stimuli, haptic perception or simply by the presence of other people. Synchronization can be analyzed as neuromuscular coordination, by tracking of body, hand and head movements, arousal, or electroencephalogram (EEG) readings. For example, it was found  that the audience of a concert synchronized its applause after an asynchronous start, while other researchers  discovered that people synchronize their finger tapping to improve coordination. While these studies only look at synchronization as neuromuscular coordination and task coordination, other research efforts are uncovering connections between synchronization in cognition, task structure, and performance outcomes in teams . Better synchronization in a team means that the team is operating in groupflow with entanglement being the key enabler of creating the flow state among team members.

In our research we have been looking at synchronization and entanglement among members of small teams and large organizations. Studying online communication and face-to-face interaction we have found that teams which are well synchronized perform better. We have studied the flow state of jazz musicians jamming together, and of large orchestras, where we found that if the musicians are moving their bodies in synch – an indication of being in flow – they perform better, as measured by the applause of their audience and the emotions expressed through the faces of the musicians and the audience.

In one of our first studies, we put sociometric badges around the necks of two jazz bands performing at a concert. The two bands were playing in the same concert, at first there was a band of amateurs, warming up the audience, and then the main concert with a professional band, fully entangled after years and years of playing together multiple times per week. The sociometric badges showed us the different degrees of entanglement of the two bands. The amateur band was constantly coordinating by looking at each other, and their bodies were moving independently. The professional band synchronized their playing together very differently. They never looked at each other, and their bodies were swinging in perfect synchrony, as measured by the accelerometers of the sociometric badges, exhibiting “groupflow” (Figure 58). 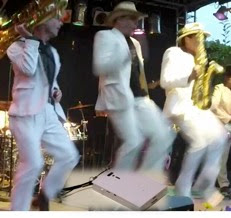 Figure 58. Jazz musicians wearing the sociometric badges (shown at the bottom of the picture) in their pants

The same behavior of multiple people synchronizing their communication behavior can also be observed using online social media and e-mail. To measure the flow state in office teams, we have defined an entanglement metric for e-mail logs of an organization, looking at how synchronized the e-mail exchange between two people is. The more they exchange messages in a similar rhythm, the more entangled they are. We validated the metric in different organizations, finding that selective, focused entanglement of employees is a strong predictor of team creativity, employee satisfaction, employee performance, and customer satisfaction.

Our approach for the team entanglement metric is to construct it from social network analysis metrics like betweenness and degree centrality (see II.3) and communication activity between each pair of members in a team.

Figure 59. Activity entanglement in my mailbox

To illustrate the idea, Figure 59 illustrates entanglement in my mailbox containing the e-mails of people that worked with me on several projects. First, I calculated network measures such as degree and betweenness centrality, etc. and activity measures such as messages sent, messages received, etc. over time. The blue line shows the mailbox owner’s rhythm (me), the other lines correspond to the people I am exchanging e-mails with most frequently. The more correlated the two curves between me and another person are, that means the more when I have a spike in the curve, the other person also has a spike at the same time, the more we share the same flow or rhythm, are in sync, and thus “entangled”.  In other words, we measure the e-mail pulse of teams based on shared activity and network position. Entanglement tracks if people exchange e-mail in the same rhythm, meaning that they are sending a similar number of e-mails at the same time. Additionally, entanglement also measures if they have the same network position in the social network created by their e-mail exchange at the same time. To compute the network, a connection between two people is constructed if they exchange at least an e-mail, adding all of these connections together leads to a social network of e-mail exchanges.  To calculate the network position, we then assess if somebody at a given point in time is central or peripheral in this e-mail network. Two people are entangled if they are both either central or peripheral in this network at the same time.

Among others we studied “entanglement” of medical innovation teams to predict team performance and learning behavior. Applying the entanglement metrics to different e-mail archives, we found for instance, that innovation teams in healthcare were more creative if they had a highly entangled core team, with a more peripheral group of occasional collaborators (the “outgroup”) who were weakly entangled with the core team members.

The same entanglement behavior also created happier customers, as measured by Net Promoter Score, a metric that asks customers of a firm how likely they are to recommend the firm to their friends. We found that the more entangled a core team of customer-dedicated employees caring about a particular customer was, the happier were their customers. The more the employees at the firm the customers were interacting with had been communicating as a closely knit fully entangled team, the higher was the satisfaction of the customers with the firm. This means that if people synchronize their e-mail sending activity and have similar network positions in the social e-mail network – without knowing it – they are more entangled, which leads to more creative teamwork, happier team members, and happier customers.

A key requirement for happily entangled teams is for team members to share the same values, culture, and goals, in other words, to be members of the same virtual tribe, as described in section I.5. To measure the degree of happy entanglement of an individual, we have developed a system based on sensing body signals with smartwatches and smartphones, the SocialCompass.